This summer, when we all were still new to virtual conferences, I signed up for talking at two of them. Back then, I thought this was a great idea. I would be able to share my thoughts with the community and wouldn’t even have to travel for that. Talking to an audience from the stage or talking to the webcam? It wouldn’t be a huge difference, right? Oh boy, was I wrong. But let’s start from the beginning.

I have an idea

I have a lot of ideas and opinions. Often technical and sometimes less so. Some of them would make a nice conference talk. I like sharing my thoughts via conference talks since I learn so much during preparation and from feedback I get. Usually, the feedback is either telling me how wrong I was or how my presentation had been useful to an individual or an organization. Either way, someone wins. 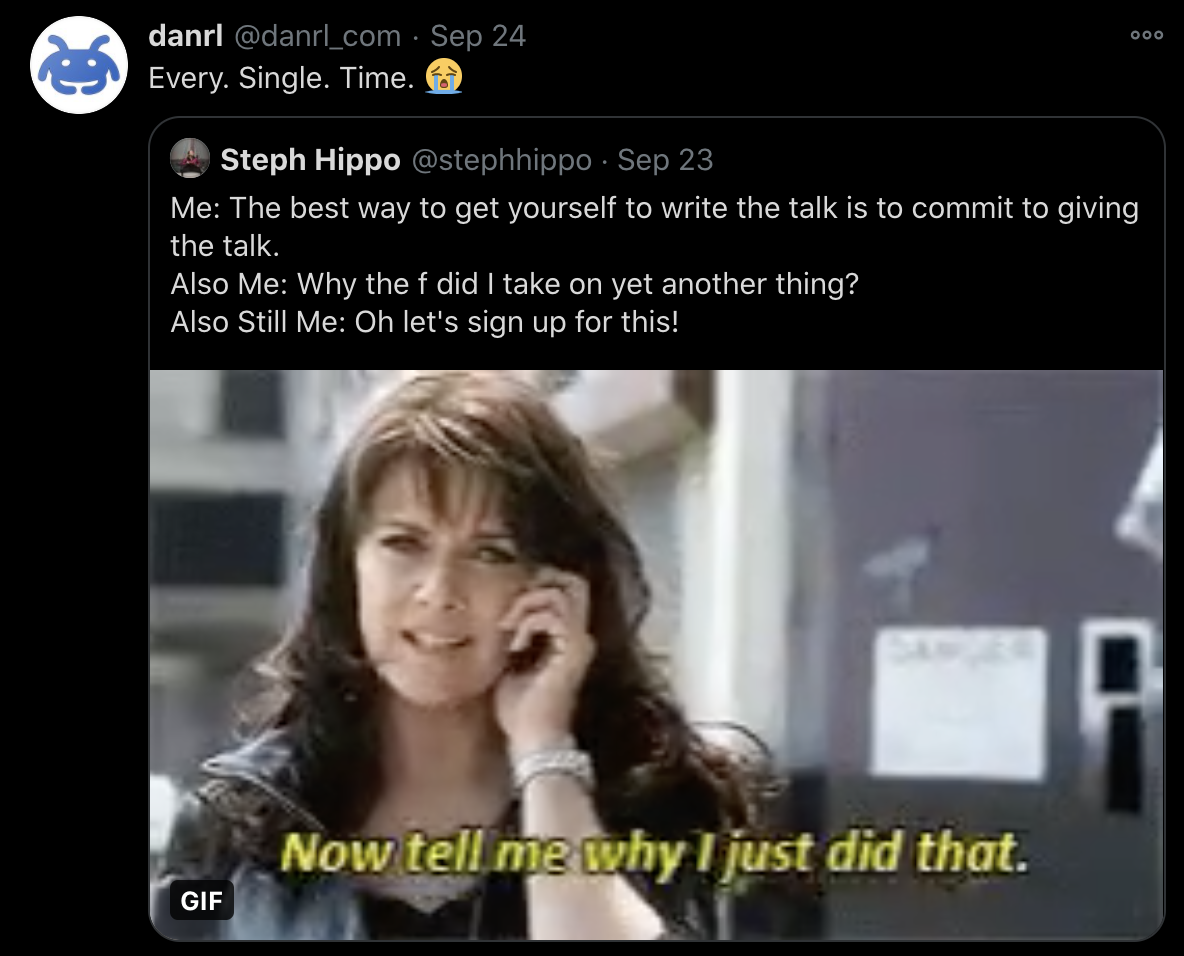 With that in mind I shared my idea about more inclusive hiring through better interview questions with the DevOops conference and USENIX’ SREcon 20 Americas. Much to my surprise my proposal was accepted by both conferences. Cool!

I procrastinate on preparing conference talks. I always have been waiting to the very last minute to get my presentations ready and upload the slides. More often than not, I would refine the slide deck while travelling to the conference venue on the morning of my talk. Over the years I developed strategies to make life for my future self less of a pain. Nowadays, I attach a detailed outline and a long’ish summary to every proposal I make. Most conferences require this anyway. The outline serves as a blueprint for my presentation. From there, I just need to fill in the blanks. Of course, it always turns out to be more complicated than that and the filling of the blanks is actually the hardest part.

Enjoying the sunset over Munich as I lose another day to procrastination.

I have always been telling myself I have plenty of time left and I don’t need to rush it. But during the pandemic my procrastination reached new levels. When I finally started working on the presentation it took longer than usual and dragged along over multiple weekends. I couldn’t get my ideas written down although they were present in my head all the time. Weird.

When I signed up for the talks I knew things would be different this time. Being an optimist I expected the opportunities of this new challenge to outweigh the risks and downsides. 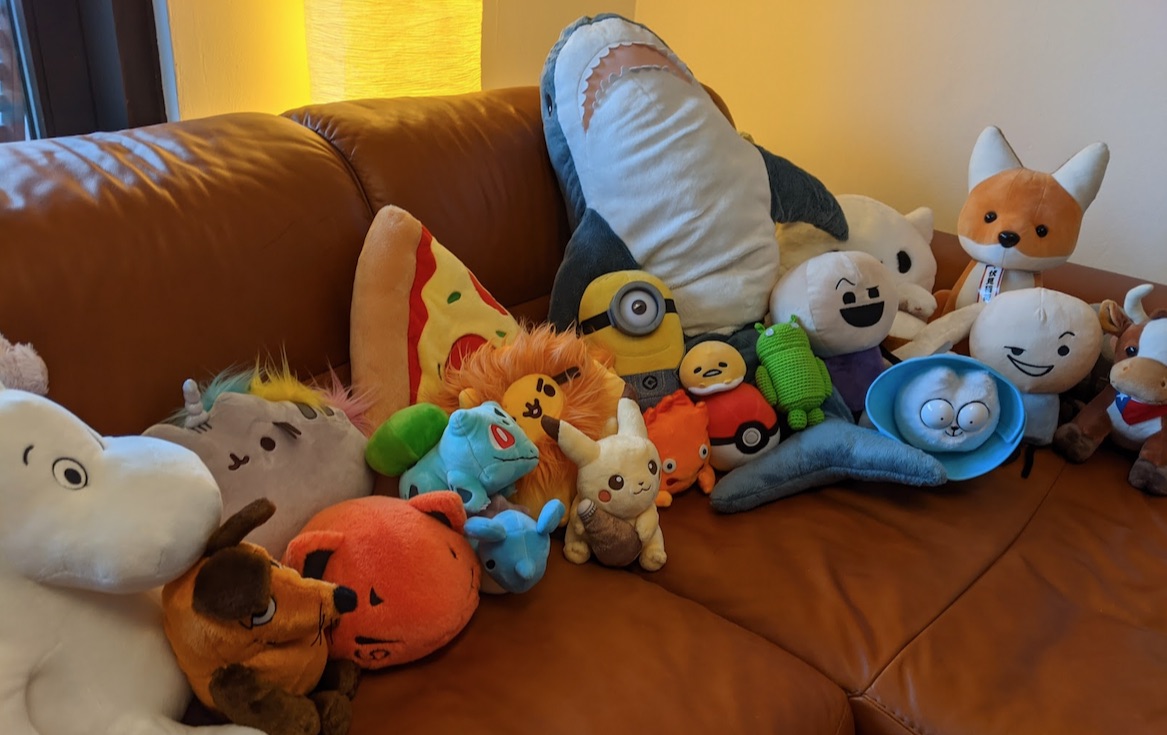 A friend sent me a picture of this plush audience so I wouldn’t have to speak into the void.

I later learned that talking into the void of a camera comes with additional challenges compared to engaging with a real life audience.

Between signing up as a speaker and actually speaking I had the chance to join other virtual conferences as a member of the audience. I saw speakers struggle and succeed. Some clearly had access to green screens and advanced live streaming equipment. Others suffered from unreliable Internet connections or lack of audience engagement. The sum of my experiences made me favor a fully pre-recorded talk over any form of live streaming. Coincidentally, this seemed to be what SREcon was mandating all speakers to. I assume this is also an effort by the organizers to minimize delays during the conference. A speaker not showing up or a presentation not working due to technical challenges is a conference organizer’s nightmare.

Another challenging aspect of my talk was that I, at the time of recording, was living the digital nomad life. With only a few boxes and one screen at my disposal I had to build a makeshift studio. Thanks to the help of my amazing wife (she’s a professional tech writer and communicator) I got the best out of a “less than OK lighting situation” in our hotel room.

For added hilarity, see our camera holder made out of a lonely sock and a kitchen grater. Finally, we found a purpose for the single socks that accumulate over time. 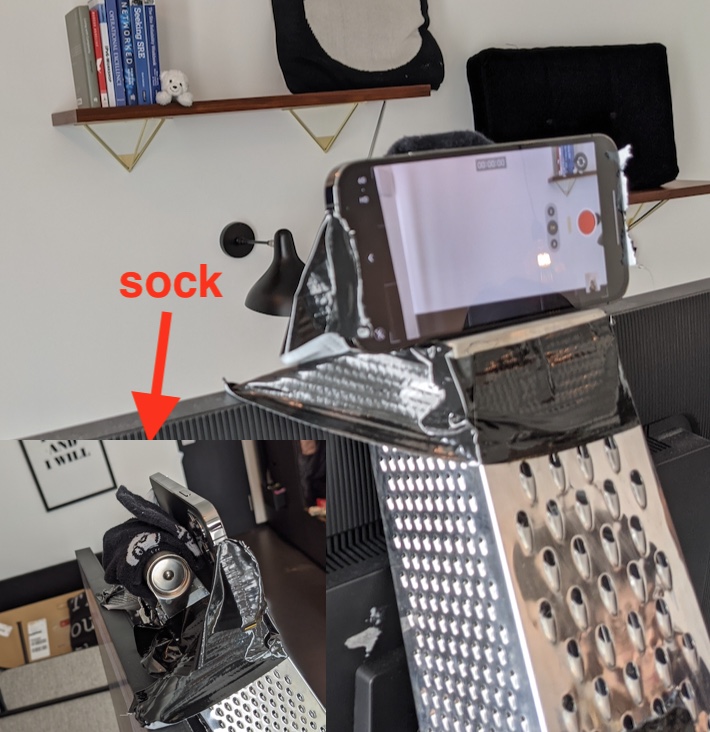 I also placed smart looking books in the background, watched over by @polarbaerli.

Recording the talk took us a full day including setting up and tearing down a makeshift studio. 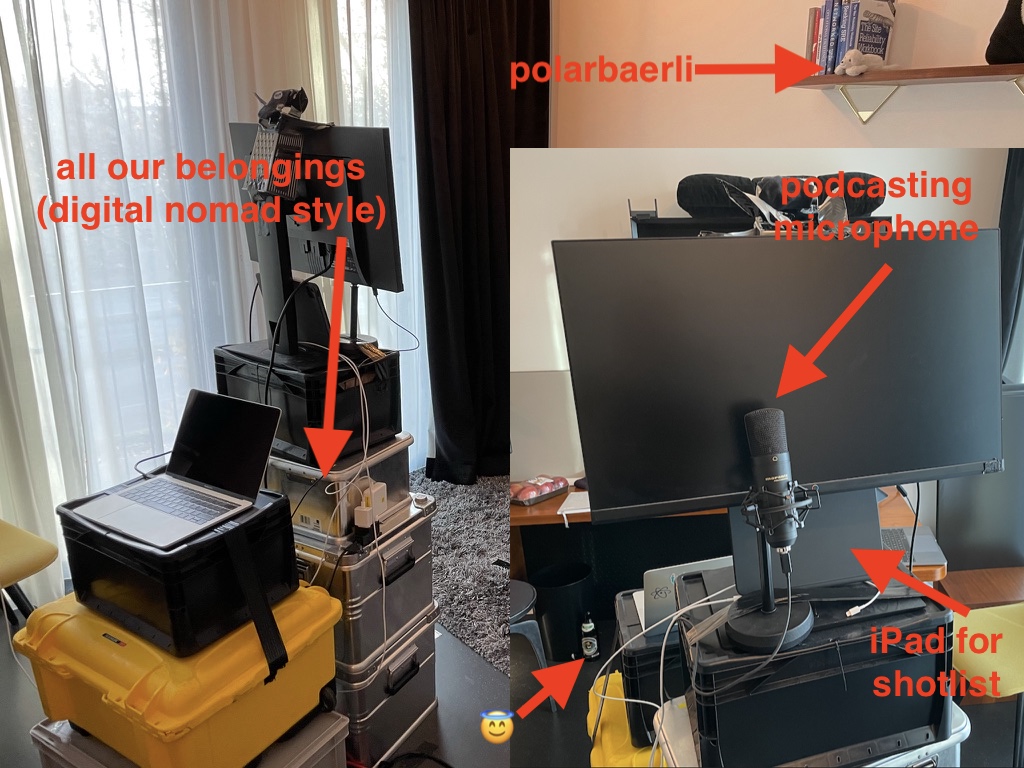 We had to stack all our belongings and rearrange the hotel room.

Recording the talk was a lot of fun. And a little stress test for us as a couple working together in a semi-professional context. I may be a little bit of a diva when I think I am the main character and the director. (Narrator: He wasn’t the director…) With only a few hours of daylight available we had to make a lot of compromises.

After a day of recording my wife started editing. It took her almost two days. We didn’t have a screen recording because we were using the screen below the camera as a teleprompter showing me the speaker notes. After cutting the audio tracks and placing videos and animated drawings in the video track, I had to screen-record a well-timed presentation run that would fill in the blanks of the video track. 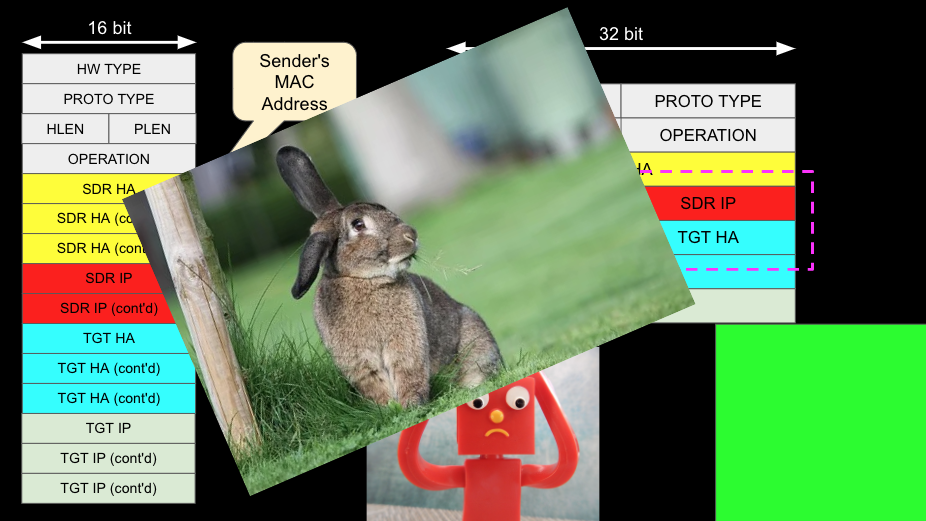 The bottom-right, green chroma key area on the slides was replaced with the camera video track during editing.

Finally, we placed the camera video track in the bottom right corner of the presentation whenever it wasn’t helping the argument to see me in medium close-up (MCU).

At this point I was very relieved to be done with the hard part. I had produced over 40 slides of content, a historical video, and numerous animated drawings. After editing I would only need to upload the recording to the conference talk management system and be present for audience questions at playback time. After weeks of procrastination and much more time for recording and editing than anticipated all seemed to be going fine. Soon I would know better. Chilling on the hotel bed I heard my wife say: “Almost done. Looks like good 22 minute content”. Wait, what? I signed up for 40 minute talks. Oh no!

Me dry-running my speaker text again and again until I got tired.

It turns out, when I don’t have an audience to react to, when I cut out all the stupid things I say and the mistakes I make while saying them, my talks are significantly shorter. I considered adding more content but I was afraid it wouldn’t make my argument any stronger. At best, it would not be boring. I also didn’t really have the time as I was once again in the middle of an international relocation. I contacted the conference organizers, explained my situation and was given a short slot in the schedule. I’m very grateful for their support and flexibility.

This was my journey in virtual conference talk preparation. Here’s what I learned along the way:

Hope to see you all soon. Preferably at a safe, in-person conference. Stay healthy!